Showing posts from February, 2012
Show All

Last Thursday we posted a picture of the Plivsko Jezero looking wonderfully wintery. Yesterday I got my mountain bike out - the first time this year - to go see what things were looking like at the lakes. This video will let you do you own bit of compare and contrast.
Post a Comment
Read more

Life is full of challenges. For the past two and a half weeks one of ours has been living without a functioning shower in our house. Last week we discovered there was no problem with the outflow pipes from our house so we've got more adventurous in how we use the facilities on the non-functioning side of the house. For example, our recently replaced toilet will flush if you fill the cistern by bucket from our one working tap in the kitchen. Likewise it is perfectly possible to use the shower if you fill bottles of hot water in the kitchen and then proceed to pour them over yourself! When we were back in the UK at the beginning of this month we happened to drive by Ardingly reservoir, in West Sussex. I commented at the time it looked alarmingly low. I wasn't wrong. The reports are now out that southern England is in a state of drought . I guess that will mean hose-pipe bans and the like. For us the last few weeks have been a real eye-openner to just how much water we use, or wo
Post a Comment
Read more

Warmer but not warm 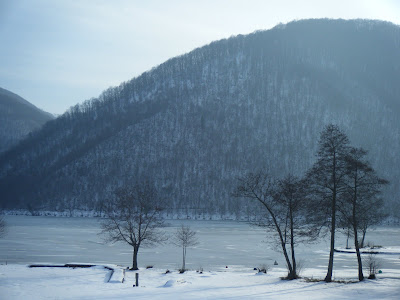 The sun came out today and in it the temperature could almost said to have been warm. Warm enough, at least, to wander around with no hat and your coat unzipped. Warm is of course a relative term. Yesterday I thought the bedroom was feeling warm until I checked the thermometer and realised it was only 9C, although that's a lot better than it has been. Whatever the temperature was out today it too was a lot better than it has been, meaning that much of the snow around town suddenly disappeared down a drain. We were hopeful this might mean our frozen pipes would finally thaw. Then we went for lunch at the lakes. This beautiful view quashed any such optimism. The lakes were frozen over. They looked amazing but it was an unwelcome reminder that warmer does not necessarily mean warm enough. And so our wait for the full return of running water continues.
Post a Comment
Read more

- February 21, 2012
Yesterday as we we walking through the slush to the supermarket to buy water I had a thought. Having survived twelve days with just one tap in the house this had been turned off at 4pm. This was to enable repairs to start on whatever it was that needed fixing so we would get water back to the rest of the house. Our urgent requirement now was enough bottled water for essential washing and teeth cleaning. But this was not what was foremost in my mind. I was suddenly struck with the similarity between an unusually heavy winter and wartime. Several local people we know who have had a hard time over the last few weeks have said it reminded them of the early nineties. I have no first-hand experience of war so I'll take their word for it. I do know that the last thirteen days have been the first time in my life I have lived in a house without working sanitation . Washing has happened with a bucket and a bottle of water and we'll not talk about the toilet situation. Two weeks ago
Post a Comment
Read more

In an exciting development for the floorball (aka uni-hockey) team we work with here in Jajce, training now happens indoors. Floorball is intended to be an indoor sport but the team in Jajce had trained outside for years because it wasn't able to hire a hall for practises. Playing outside in snow, ice and freezing temperatures is good for building dedication to the cause but not helpful in honing the finer points of technique. This Sunday was the second of what should be a regular session in Jajce's new sports hall. It has to be said that today you could see your breath inside but at least it wasn't slushy underfoot. Playing on a new, almost perfectly flat, playing surface will definitely sharpen up everyone's skills. This Sunday it showed up mine as somewhat lacking but I'll comfort myself with the knowledge that last week I scored the first goal of the first game of our first session with my first touch...in a game my team went on to lose!
Post a Comment
Read more

An avalanche of sorts

We are aware we've got off very lightly over the past couple of weeks compared to some people in the Balkans so, in the interests of keeping things light-hearted, we present this video of a minor inconvenience this afternoon. A more pressing concern is the fact the water is frozen in the side of the house that houses the shower and toilet - they've both been out of action for 7 days at the time of posting this video. Perhaps the 'avalanche' is an indication of a little thawing. We can but hope!
1 comment
Read more

Despite the unquestionable inconveniences it causes there is still something wonderful about a decent snow fall. It's too easy to grow up and only view the downsides. Working with young people provides a healthy reminder to never get too detached from your childlike - perhaps even childish - side. And so it was that a Facebook post gathered a group of the young people we know for a bit of fun in the snow on Saturday morning. Our group had a collection of sledges of various vintages and a large plastic sheet to venture down the slope between apartment blocks on. Other young people from the area were out on skis, performing jumps that would have given the health and safety brigade a heart attack. As with a lot of good old fashioned fun, our couple of hours in the cold resulted in a few bruises but a whole load of happy memories...and a video or two!
Post a Comment
Read more

Bosnia and Herzegovina, along with much of the Balkans, has made the UK news for its recent bad weather. We arrived back in Jajce yesterday after three weeks in England. Our EasyJet flight from Gatwick to Zagreb took just two hours and the onward journey from Zagreb was surprisingly clear, given the amount of snow covering everything other than the road. Jajce has had heavy snow and seriously cold temperatures in the last week, although nothing on the scale of Sarajevo or Mostar. Sarajevo is used to extreme winter weather but this year has handed freak conditions to Mostar. The combination of snow and wind, power cuts and frozen water pipes has made things particularly challenging. Half the city spent at least 36 hours without electricity or running water. Our apartment never lost its electricity however the back half of the house has frozen up - meaning no shower, no sink and, perhaps most inconveniently, no toilet! We've been assured that the fact the tap in the kitchen still w
1 comment
Read more
More posts