Showing posts from June, 2012
Show All

An insight into bus travel

- June 27, 2012
Five hours and twenty minutes sat on a bus between Zagreb, Croatia, and Jajce, Bosnia and Herzegovina, yesterday morning gave me more than enough time to ponder some of the idiosyncrasies this mode of transport offers in this part of the world. I suppose I should confess I'm no expert; the town I grew up in was not big on buses and, baring one memorable overnight coach journey from London to Edinburgh, most of my bus experience involves the top deck of old London Routemasters. That and school trips. The distinction between a bus and a coach that the English language provides is not one that holds up in translation. Everything is a bus here. There are local buses and there are buses that make international journeys. From the bus station in Jajce we could travel to a number of nearby or neighbouring countries but the only trip I've made thus far is the one to and from Zagreb. This latest journey was the first time we've travelled the route through Bihać and Karlovac;
2 comments
Read more 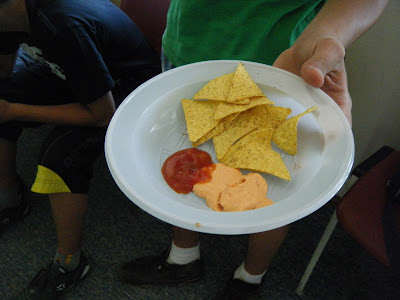 We recently came by a generous consignment of tortilla chips. Although they are readily available in shops here they are relatively new and comparatively expensive. Most of the young people we work with had never tried them before. It's fair to say most were not impressed when they came out of the box last week. This week, in an attempt to spice up the taste experience, our local colleague suggested we buy some salsa dip and make a more local-orientated dip, by mixing sour cream and ajvar – a relish made predominately from red peppers. This afternoon he gave a short talk introducing the concept of dipping chips and I joined him in a demonstration of how this is done. To their credit almost all the young people attending our Novi Most youth club session gave this culinary novelty a try. The mild Mexican salsa was deemed to hot and spicy by a few that I spoke to, nevertheless a couple of bags of chips were happily munched through. This is just another example of a ne
Post a Comment
Read more 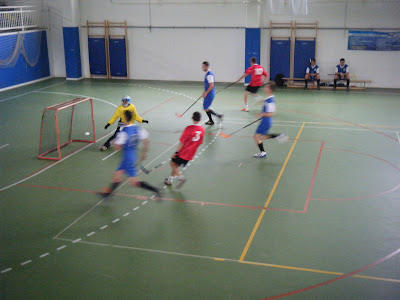 There are good surprises and there are bad surprises. Today we had a bit of both. We had a floorball game arranged for the team I'm involved in training, Lavovi Jajce, against a team from Prijedor, a town about an hour and a half north of us. The bad surprise was the size and age of their team. Bigger and older than ours. Significantly. I wasn't expecting to play, seeing as our team are all teenagers, but they wanted someone to drag the average age up so I was called into action. The pre-match team talk made it clear what Dina, our coach, thought of our chances: "I want you to keep playing, keep trying, even if you are losing fifteen nil!" The good surprise began with going a goal up shortly after the game started. I was playing in what could be described as a right-back kind of role. I was just waiting for some undefendable attack on our goal. It never came. At least it didn't while I was on the pitch. Floorball is one of those rolling-subs games. The three g
Post a Comment
Read more

This video is about one of the hot topics of the last week here in Jajce. As I say in the video, I'm not claiming to be an expert on the issues or have all the facts at my finger-tips. But as I was cycling past Brana today I thought I'd stop to film incase there's someone out there on the internet who'd be interested in this news who hasn't heard it already. As for what will actually happen to this beautiful little part of central Bosnia: time will tell. And when it does I'll be sure to make a video about it!
1 comment
Read more 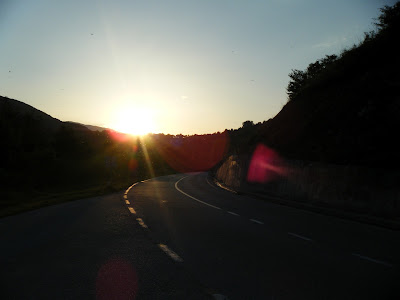 I spent a lazy Sunday afternoon soaking up the delights of the Jubilee Pageant, thanks to the streaming video on the BBC website. The sight of singers belting out Land of Hope and Glory while clearly soaked to the skin was, I confess, a highlight. The commentators predictably commented on Britishness of it, although they can probably be forgiven as such assignments rarely require more than restating the obvious for the umpteenth time. After my fix of rain and Britannia ruling the waves I thought I'd go out and cycle in the sunshine, of which we had plenty today. Unfortunately for me it seems the mayflies hadn't go the memo about the change of month. I took this photo on the return leg of my ride around Plivsko jezero, the large lake just outside Jajce. This is the main road looking back in the direction of Bihać. Everything that looks like dirty spots in the sky or light specks around the sun flare are in fact mayflies. There were hundreds of them. Probably thousands. I was
Post a Comment
Read more
More posts