Showing posts from July, 2009
Show All

- July 30, 2009
“Bosnia’s top international representative has imposed an interim resolution on squabbling Mostar political factions, establishing the basis for the temporary financing of public services and sanctioning city councillors.” So begins an article I saw tonight on BalkanInsight.com. I think this is a good news story. I start like that because we’re talking about the dangerous and divided world of politics and I’m not out to play political point scoring but any move that means that municipal workers will receive a pay check again after four months is good in my book. I don’t suppose the squabbling politicians have been struggling to keep food on the table our save their electricity from being cut off. Sadly many whose interests they are supposed to be working to protect are not so fortunate. But if the article is to be believed it seems the High Representative has taken the view that it is unfair that those who have been working haven’t been paid while those who haven’t been working have.
Post a comment
Read more

I saw this encouraging graphic this morning. I think it speaks for itself!
1 comment
Read more 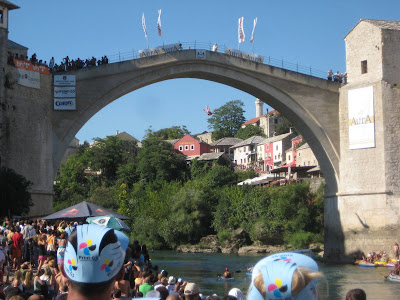 443 is the number of friends I currently have on Facebook. It is also the number of diving festivals held at Mostar’s Stari Most. The latter is without doubt the far more impressive figure. Given that it’s an annual event that’s quite some heritage. Does anyone know of a longer sporting tradition? We spent a gorgeous, hot sunny afternoon today watching some very brave people doing things I wouldn’t even like to dream of doing. Here’s a photo to prove it. If you’re not sure what’s special about the image just look a little closer at the sky under the bridge, just to the left of the tall tree!
1 comment
Read more

- July 25, 2009
Actually my mother never said what I’m about to say. We never had a computer at home when I was growing up. Even if we had it wouldn’t have been online as that didn’t exist (at least not in the lives of normal people) back then. The maternal advice in question is, of course, don’t meet up with people you’ve meet online. It’s not bad advice. As a youth worker I’ve given it , in all seriousness, to several young people who were about to do the sort of stupid things lead to teenage girls making headlines for all the wrong reasons. However, as an online video maker I’ve broken it on several occasions . (Although the first time my parents were loitering nearby; could have been caution or curiosity!) Today, on a brief visit to Sarajevo, Rowan and I met with someone who, until now, has only been an online contact - ‘the other British blogger in Bosnia’ . (In truth, I’m probably ‘the other’ as they were here first!) At four o’clock Rowan and I were sitting on a park bench across the river fro
Post a comment
Read more

- July 23, 2009
The High Representative was in Mostar today to bash some heads together (metaphorically one assumes) over the inexcusable stalemate local politicians seem happy to maintain. The OHR issued a press release on Tuesday. This extract will give you a flavour of the problems the city is engulfed in. “Since the local elections more than nine months ago, the leaders of these parties have failed to hold any serious talks aimed at overcoming the situation in Mostar, despite the fact city council has yet to elect a mayor and adopt a city budget. Instead of pursuing political dialogue, the parties have sought to deflect blame from themselves and direct it towards each other and the OHR.” We heard that if the meeting today did not produce any resolution then protestors would blockade the road to Sarajevo for the next couple of days. There is but one main north/south road so this would be a fairly crippling action. However, the situation should never have been allowed to get to this point. As I wr
Post a comment
Read more

- July 22, 2009
For the past couple of days I’ve been introducing young people to the joys of vector graphics. That may mean nothing to you; it didn’t mean much to them at the beginning either. If you’re thinking of Paint or Photoshop then you’re metaphorically barking up the wrong tree – they are both bitmap packages, admittedly with a sizable capability gulf between them. Illustrator is a vector program, as is CorelDraw. I’m sure either could be purchased here for next to nothing. I haven’t check but I do know a young person with a copy of Photoshop CS on his memory stick that is doubtless of dubious origin. Novi Most doesn’t have the budget to start equipping our computers with expensive (legitimate) design software so I opted to install Inkscape. It’s an open source equivalent of Illustrator. It more than does the job of introducing young people to a different way of using computers. Using eDCC, Rowan has been running courses in Words and Excel for a few months now. These have been really popula
2 comments
Read more

- July 21, 2009
Thoughts of winter seem a long way away. For the past couple of weeks the daytime temperature has been comfortably above 30 and it’ll climb to a lot nearer 40 by the end of this week. However over some late-night pancakes tonight we were telling tales of mouldy walls and three jumpers (sweaters!) indoors to a couple of visitors. As much as I find myself acclimatising to the increasing heat we now have to wonder if that will make the inevitable winter cold so much the colder. Last year we only had a dismal British summer to reference against. This year we have a poor Bosnian one; it’s come late, with rain lasting into July. However it’d still be a grind-to-a-standstill heat wave in the UK. And last week Mostar had its hottest night for about a century, with the temperature barely falling below 30 all night. Once used to such warmth I can start to see how temperatures in the teens will feel chilly.
1 comment
Read more

- July 15, 2009
Tonight we were working it Klub. It was a relatively quiet night because many of the young people who would usually be there are at a camp this week. However, I doubt it was quiet across town as Zrinjski Mostar beat Slovan Bratislava one nil. Yes, Champions League Qualifying football happening just around the corner, with tickets less than a fiver, and we couldn’t go! It was Rowan’s birthday today. She is not adverse to a bit of football but I do think if we had been free tonight we wouldn’t have spent it in Bijeli Brieg Stadium. But maybe next time!
Post a comment
Read more

This Friday in Mostar... 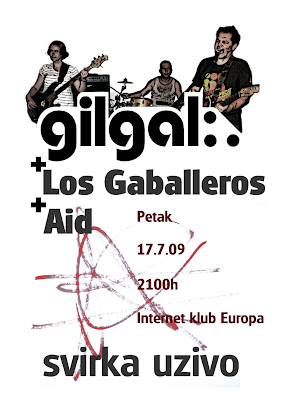 Gilgal - that's us. If you're anywhere near Mostar on Friday night to drop by and check this out; if you're not we hope to bring you the video footage to enjoy! WARNING: The last gig we went to in this venue was ear-bleedingly loud so wear ear plugs - we will be!
1 comment
Read more

- July 13, 2009
I’m sure I’ve mentioned a few times before the exceptional quality of the early evening light in Bosnia and Herzegovina. I might not have mentioned the incredible starry night sky we witnessed a week or so back. I don’t think I’ve ever seen the night sky look so beautiful. It provoked a friend to ponder if perhaps there’s a correlation between the increase in light pollution and decrease in belief in God. But tonight a drive in the dark back from Sarajevo gives me two very different light-related tales. There is but one main road that connects Mostar and Sarajevo. For almost the entiretiy of its length it is single carriageway, breaking into three lanes only on its steepest sections, for the benefit of those desperate to overtake a painfully slow lorry grinding uphill. They go painfully slow downhill too but for that you must supply your own patience! In the two and a bit hours it took to drive home I must have seen more than a dozen cyclists chancing their luck with no lights on thei
2 comments
Read more

Not just the Brits!

- July 12, 2009
It’s well known fact among British travellers communicating with those of another mother tongue that any English word can be understood if repeated often enough, with increasing volume. That was why our ears pricked up at lunchtime when from the table behind us came the refrain: WE ARE WAITING FOR SOME FRIENDS! As the gentleman in question was not using his native language one might imagine him showing some compassion for someone struggling with his accent accent; not a bit of it. Rowan was soon laughing, indiscreetly, at a poor waiter startled by an English language outburst from a Spaniard. With their beer ordered they sat around waiting for their friends. Before long a line of X-Trails was neatly parked outside the restaurant, leading me to guess our entertainment came courtesy of EUFOR’s presence in Mostar. We know a few words of Spanish, thanks to a number of trips we made to the south of Spain in the late nineties; enough to make the assumption their noisy conversation later tu
Post a comment
Read more

- July 11, 2009
You might remember me writing about our first concert. Well, our second one is on Friday night at a local internet cafe with a habit of staging rock gigs! We have twelve songs all ready to go but we have a problem. We have no name. We need one for the advertising by Monday. Perferably in Bosnian. We're a three-piece alternative rock band, singing in English. If you think you have a name that might match our volume and energy then please let us know. (Comedy candidates need not apply!)
Post a comment
Read more

- July 10, 2009
This will doubtless end up like one of those ‘conversations’ you have on the street; the sort where neither of you actually stops walking but instead attempt to achieve a neck rotation worthy of a barn owl. To that end I think I’m just going to throw out a series of sentences. They may appear random but they’ll all have some untold story behind them. If you just have to know more then let me point you in the direction of the comments. So here goes... Rowan was bemused that the band outside the rehearsal studio weren’t excited about the tortoise climbing the stairs. Andy Gliddon helped me provide a fitting tip of the hat to this and that with some fine adlibbed vocals. Swimming by Bosnia and Herzegovina’s answer to Niagara is good; seeing young people who used to spit and swear at each other getting along is better.
1 comment
Read more
More posts