Showing posts from August, 2012
Show All

Driven round the bend 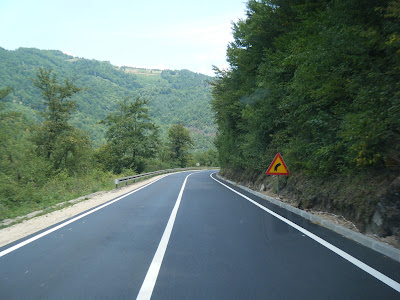 Back when we were living in the UK there was a time we were proud owners of a new new MINI. It was yellow. It was also a great car; the sort of car you could get back into after a day at a motor show and be completely satisfied with, even though it cost a fraction of the price of some of the cars you'd sat in during the day. It was during on of these motor show trips that I paid a tenner for a ride in a Caterham 7. Because if the MINI had a reputation for go-kart like handling the Caterham represents a whole other level of raw motoring. And so it was that I had the wildest five minutes I've experienced on four wheels. Apart from the few seconds after pulling away the car never travelled in a straight line. It slipped and slid, squealed and spun its way around the little test track. All hot exhausts and burning rubber. The definition of a blast. These days I don't drive a MINI, or a Caterham; I drive a Volkwagen Transporter. It's not a car but in my experience it&#
Post a Comment
Read more

It wasn't so long ago that I wrote about a bus ride from Zagreb to Jajce. When I did I would have considered it quite a long trip. No longer. Last week was bookended by two 28 hour bus journeys. Sarajevo to Oldenburg, in northern Germany, and back again. In a little bus. 29 seats, 25 passengers and 3 drivers. As near to non-stop as was possible. Had the bus been able to reach the speed limit on the motorways the trip may have been many hours shorter but the seats did recline a little, the air-conditioning worked and it made no worrying noises! Needless to say this is my new benchmark for long-distance road travel. It was a trip of many firsts, many of them being borders crossed by young people who had never been outside of Bosnia and Herzegovina before. I'll leave comments on their interest in the comparative price of chocolate for another post and instead say something about the reason for such a bus ride. We were attending a international event for teenagers called Teen
Post a Comment
Read more
More posts