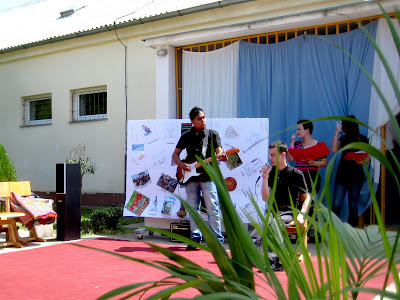 I love helping people to creative firsts; I don’t particularly enjoy spending money. When I do spend I want to know it’s been money well spent. A couple of months back I started e-begging for guitars. It was fantastic when we started to see donations coming in. But then came the responsibility to see that cash was well invested. After talking with some of my students I decided we needed to get an electric guitar and amp, along with new acoustic guitars. I’m going to claim that was a very inspired move on my part!

You can see the guitar pictured here, being played by one of our students during a concert at his school. He had two spots on the bill. The other spot, which I tragically forgot to photograph, had him playing guitar while a fellow student recited a poem. Together they recently won a generous cash prize with their creation, coming first in a talent show for high school students across the canton. As one of their teachers excitedly explained, it was the first time anyone one from their school had one anything in a competition like this.

He was so thankful we lent him the guitar for the concert; I am so thankful people like you made that possible. This is just the beginning. He will be playing at a concert in Klub next week, as part of a band drawn from our music course students. It’ll be a first band performance for all of them. I’m confident it’ll inspire many others to get creative. And I won’t forget to take photographs this time!
concert creative electric guitar first prize talent show