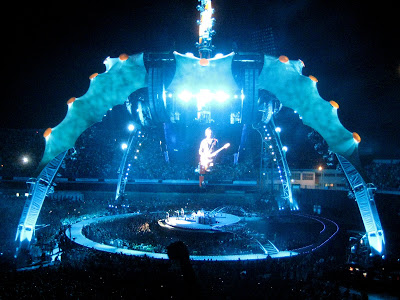 Almost five months ago I wrote a post titled ‘Inconvenience or Adventure?’ Back then I was still debating whether Zagreb was too far from Mostar to consider getting tickets for the upcoming U2 show there. Last night as we soaked up the spectacle in the Maksimir Stadium it was obvious I was right to choose adventure over inconvenience.

I’ll get some video from our trip up tomorrow but for tonight I’ll leave you with one pretty picture (The Edge, featured on the screen, got birthday champagne before the encore – nice touch!) and this link to Bono introducing One. I could write loads about the amazing ability of U2’s songs to be reinvented with special poignancy or meaning in different situations but I’ll just say that last night this one pushed the button for me. ‘We’re one but we’re not the same, we get to carry each other, carry each other...’
360° Tour Bono one U2 Zagreb