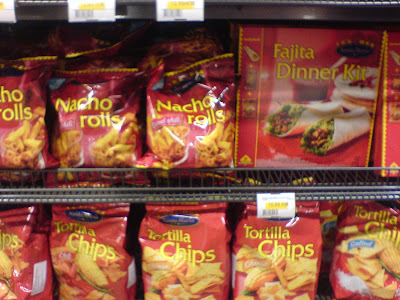 Yesterday I promised a more Bosnian flavoured post. Today I break some sweet news, even if it is of an invasion. The picture has probably given it away already but this evening’s cause for joy (other than Spurs 5-0 win over Burnley) is this sight that greeted us at the end of the aisle near the cheese counter in Tus, our local supermarket. Yes, that really is a display of Tex Mex delights! This discovery came hot on the heels of the revelation that Mostar actually has a Mexican restaurant. We’ve not seen it yet but we now know where to look. Up until now we’d had no reason to assume anything other than that Mostar only had three types of restaurant: traditional national-cuisine ones, Italian-influenced ones and generic-grilled-meat ones. (Yes, we’re filing the plentiful pizza outlets under Italian!) We eaten in many of the above and several are very good but sometimes you find yourself yearning for a little variety.

Faced with such a tempting – dare we say God sent? – display, what else could we do but splash out on wraps and guacamole, nachos and Louisiana hot sauce? Here’s to the Mexican invasion; suddenly making this evening’s dinner is a much more attractive, hot and spicy, proposition!
Bosnia and Herzegovina food Mexican mostar supermarket Tus