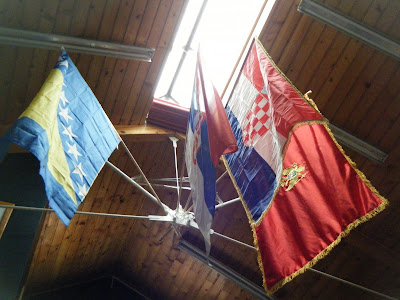 As a songwriter I know something of what it takes to marry thoughts and melody, and then present the result to an audience. Every song is different. Some come easily, some are labours of love; some are easy to hold lightly, some are profoundly personal. When I got the chance to play with a Serbian folk songwriter last weekend I quickly realised this was no throw-away tune we were bashing out. I won't claim to have caught all the lyrics but it was enough to know the subject was a friend who had walked out of rehab and then died of an overdose. It was a song born of painful personal experience.

We were playing at a conference that had gathered ex-addicts from across the Balkans. The flags hung in the meeting room announced the countries represented. It's not an array you'd often see displayed together, and some would say the delegates were not a group you'd often find together. You could put it down to their shared past experiences, the struggle of overcoming addiction, that gave the group such an obvious sense of togetherness despite the labels people would so often use to divide them. It could be that they, like all the people of the former-Yugoslavia, have much more in common than the nationalistic rhetoric would have you believe. Or it could be that they had all found Jesus to be real; a life-transforming influence in their lives.

I didn't think to ask any of them their opinion so you'll have to listen to mine! I'm going to go with a cautious all-of-the-above, although one conversation definitely indicated being an ex-addict doesn't automatically mean you want to spend your time hanging out with other ex-addicts. These people were not blind to their nationalities but neither were they solely defined by them. The unifying factor was the Jesus thing. If this were just theory it would insensitive to suggest it. However, the weekend was a demonstration of a different reality than the one usually reported by the media. In a part of the world where religion is held responsible for so much that is, and has been, wrong between different groups, the power of a real relationship with Jesus to transcend ethic differences should not be ignored.

And the song? Well, the band was made up of others who, like me, owe more to the pop and rock greats than to folk legends for their musical influences. The playing may not have provided the most musically authentic folk experience but the emotion was spot on. You could tell how much it meant to the singer. I am grateful for the opportunity to have been part of the moment.