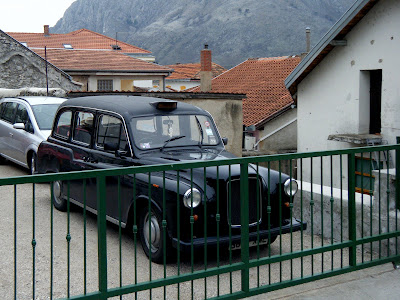 It’s funny how some things can be so familiar to some yet so foreign to others. We were dropping a friend and co-worker home today after a morning of workshops when they started shouting and pointing: look at that weird German car! We looked, immediately realising someone was in need of a little education. Objectively, yes, it is a weird car but is not a weirdness that should be blamed on the Germans. That they can be blamed for all the Mercedes, Audis and BMWs that clutter Mostar’s streets says more about their ability to churn out desirable status symbols rather than weirdness on wheels.

The idiosyncrasy on show here was the proud preserve of the Black Cab, the taxi that is, or certainly used to be, ubiquitous in the frantic ferrying of busy people about Britain’s capital. Why this one came to be parked somewhere up a back street in Bosnia and Herzegovina is anybody’s guess. But running British licence plates and sporting a still-valid-for-another-month tax disc we have to assume that legendary piece of the London landscape is just visiting.
black cab bosnia herzegovina British. cab car German London mostar taxi Weird