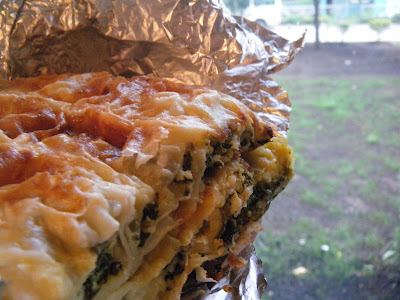 Brits in Bosnia commented on a recent post that a picture of some zeljanica would provoke some jealousy in the now ex-expat blogger formerly known as Fraught Mummy*. When this healthy chunk of the aforementioned delicacy arrived as a gift for someone who attends Klub Novi Most I had to grab the opportunity to snatch a photo.
One of the older young people had decided to volunteer to resurrect the 'garden' at the front of the Klub building. What you see to the right of the photo are the first green shoots of new grass springing up where once there was nothing but hard baked earth. A neighbour had spotted him at work and asked for some assistance in her garden. The home-baked goodness you see is the reward for his generosity.
*So Bosnia is down one English blogger but if you're interested in how the UK looks after getting a little Balkan perspective in your life then I sure there'll be some good tales of readjustment at www.pantswithnames.com.
blog Bosnia BritsinBosnia Klub Novi Most pants with names zeljanica

WeDoAdventure said…
I guess I'd describe it as a savoury pastry filled with spinach and maybe a few other things. The local word for this type of dish is pita, which literally means pie. Zeljanica is spinach pie, but it's also common to get pita filled with meat, potatoes, cheese. A few times I've seen sweet versions: apple or cherry.
2 May 2010 at 08:52