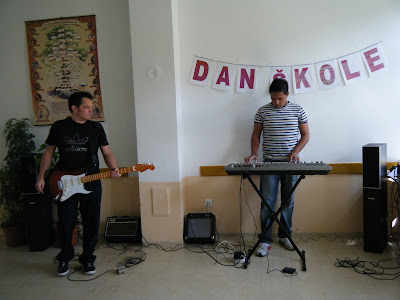 'Mission Accomplished' is probably forever tainted by the George Bush connection, which, for the sake of fairness I should add, was probably not his fault. The huge banner, that is.
Undeterred, let me declare today a mission accomplished moment. It was the end of a two month crash course in piano playing that saw my student (right in pic) achieve his goal of performing a famous local pop song with a fellow student singing at an end-of-term school performance. The show was a wonderful mix of different acts, from belly dancing to a Britney Spears cover.
He had shown a real aptitude for guitar over the past couple of years at the course we run at Klub Novi Most but showing ability on guitar and being able to learn piano are two very different things. I'll admit I was slightly skeptical when he explained his plan. This morning persistence and dedication paid off as he put in a great performance in front of a packed room full of friends, staff and fellow students. He'd been very clear he wanted me to play along with him so that's me on the left of the picture, taken as we were setting up: it's a nice snap-shot of satisfaction.
mission accomplished music performance piano satisfaction school student