The writing's on the board

Back in the UK I used to take lessons, that is I was the sort of person who'd give the real teacher a break for a lesson or two. Who knows how many times I wielded a dry-wipe marker during the late-nineties and early-noughties but I do remember the first time I stood up in a classroom with an interactive whiteboard. What a distraction, to me at least. The subject of that lesson escapes me although me the memory of playing with the light-sensitive pen on the projected image does not. Nevertheless, as a child of the seventies chalk dust and free school milk were part of formative educational experience. 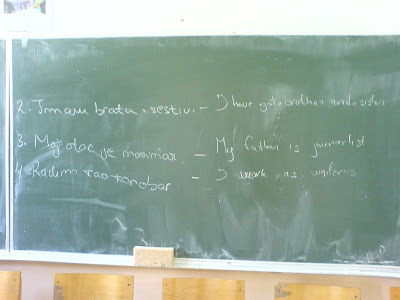 I learnt something about Bosnian handwriting today. Somehow in a little over eighteen months here I hadn't noticed that, from an English perspective, handwritten m's and n's have an extra hump. Look closely at the picture above and you'll see a sentence that starts: Moj otac je. That means 'my father is'. The next word was a mystery to me. It looks vaguely like 'morimar', but glancing at the English translation I could see it was, in fact, 'novinar' . Then I noticed that the translation was missing a little something. The indefinite article. (A fair omission as they don't exist in the language here.) Tempted beyond what I could endure I picked up the chalk and added a discrete correction! 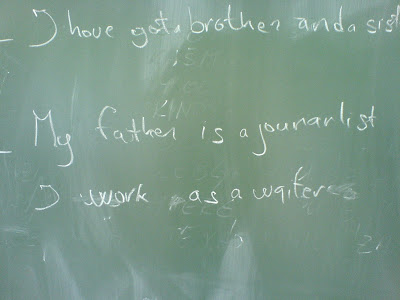