An Eagle and an Ostrich Day! 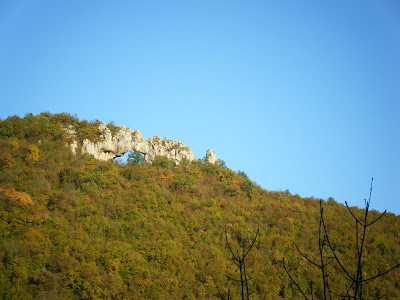 Before today we had been to most of the major cities in Bosnia and Herzegovina. Now we've been to Banja Luka we can say we've seen them all. Obviously we know Mostar the best, after two years of living there. A few times we've surprised friends from Mostar with how well we know Sarajevo, but then we've been pretty regular visitors. Tuzla I've only visited a couple of times, and never spent long exploring the city; Zenica we saw but briefly before Bosnia and Herzegovina's disappointing defeat but Portugal in their World Cup playoff game.
Banja Luka is now our nearest major city so will be getting to know it better in the months ahead. The road from Jajce clings to the banks of the Vrbas, at times almost impossibly so; definitely calling for a cautious first drive. There were a couple of emergency stops courtesy of big trucks trying to negotiate the low rocky overhangs but the real danger was the distraction of new views to take in. The snap-shot show the 'stone bridge', or Kameni Most. Note the clear blue sky and golden sunshine. Note too that I pulled into a lay-by to grab this photo! As for the eagle and the ostrich: sadly I'm lying about the eagle, it was almost certainly a buzzard, possibly the Steppe Buzzard, but eagle sounds so much more emotive. The ostrich, however, was the real deal. It may even have been hanging out with an emu. Ornithologists with realise already this is not their naturally habitat. They were obviously on show to lend credibility to the 'eco-resort' sign we'd just driven by! We will have to return to investigate. The road is narrow, but aren't all the best ones?
Banja Luka birds buzzard eagle emu Kameni Most ostrich