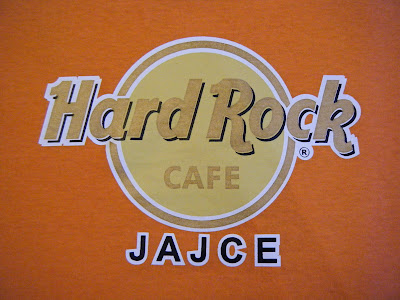 Before you ask, no, of course Jajce doesn't have a real Hard Rock Cafe. Unlike Mostar, it doesn't even have a place pretending to be one. As someone who has visited Hard Rock Cafes in London, New York and LA – yes, the original one is in London – I know it takes more than a few guitars and a Jimi Hendrix poster on the walls to qualify as rock'n'roll's finest eatery.

Nevertheless I share the photo because it makes me smile. Who wouldn't want a bright orange (fake) Hard Rock T-shirt was a birthday present! That not the real reason though. As we head into the week that should see our first public rock'n'roll performance in our new town I thought is was a great way to get back in the live music mood. Moving has meant we've gone a few months without practising altogether. We're either in for a pleasant surprise or a horrible shock when we crank it up for rehearsals over the next couple of days!