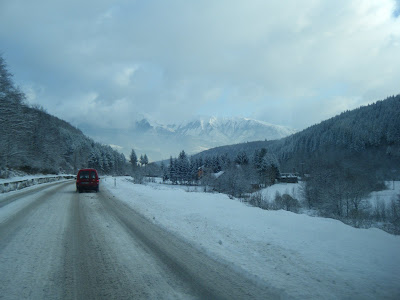 Sunday afternoon is, traditionally, a good time for a stroll. And so yesterday afternoon, with the snow falling thick and fast, Rowan and I headed out to catch a glimpse of a different kind of Jajce. Such eagerness to run out and play in the snow is undoubtedly a result of our childhoods in England, where snow was a blink-and-you'll-miss-it phenomenon. All that has, of course, changed in the two years since we left. Last week my hometown had it's heaviest snow fall in fourty-three years, apparently.
The snow is Jajce is unlikely to go anywhere for at least a week, accept from the roads and pavements, where a very efficient cleaning operation had everything snow-free by the time we were back from a trip to Vitez today. That's one reason I'm happy to have grabbed Sunday's video, for the full alpine effect! The photo is from about half past eight this morning, somewhere approaching the town of Travnik and the Vlašić mountain. It was a great to be out driving this morning with everything looking so 'Winter Wonderland' - even if we did have to be up and out uncomfortably early for the privilege of seeing it before the tarmac was visible again.
afternoon alpine Jajce snow stroll sunday Vlašić