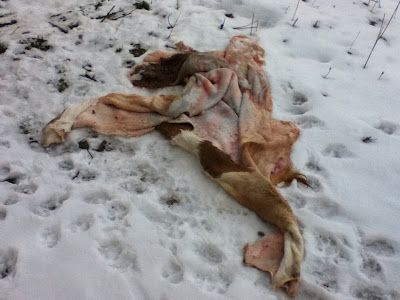 The last couple of days it has been attempting to snow here in Jajce. This has jogged my memory, for better of for worse, reminding me of this photo from when we had snow settled everywhere earlier this year. Against the white blanket covering the ground this mystery object stood out as we studied the view from our kitchen window. Rowan declared in disgusting and I, employing a sensible look-don't-touch policy, reckoned it to be some kind of animal skin, probably removed at one of the butcher's shops near our house. Whatever its origin, and however it ended up opposite our home, it provided hours of entertainment for the local stray dogs. For the better part of a week we watched it get smaller and smaller until, with the snow, it disappeared altogether.