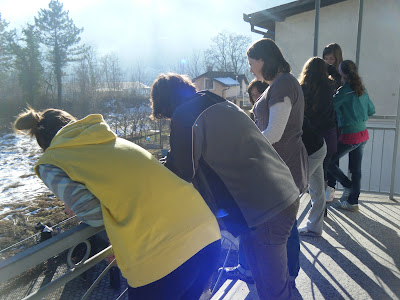 The sun came out on Saturday. It's not that we haven't seen it for months but this was the first time for months that you could say it was warm, or at least warmish. Running around at uni-hockey training I wasn't the only one to end up in a t-shirt. Since the start of January, after training on Saturdays, Novi Most has been running a social session for a couple of hours. Most of the team will turn up joined by a number of other young people from the area.

So far this year the sessions have happened inside – apart from one snowy weekend that saw some impromptu 'ice hockey' happen in the area behind the building. This week the sunshine and warm weather prompted our co-worker to suddenly decide to get all the lads clearing leaves and generally tidying up the yard outside. He is unashamedly keen to have this space ready for the onset of barbecue season! And so an industrious half hour from the boys saw a splendid piece of early spring cleaning accomplished under the watchful gaze of the girls. Was it sexist not to hand one of them a broom? Not in this country. It's been our observation that gender roles here have well established and accepted norms. Many people seem to have a clear distinction between what is men's work and women's work, and I certainly didn't catch anybody complaining about that in this instance!