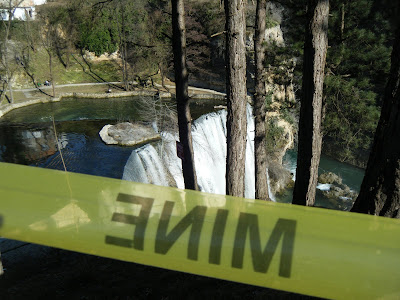 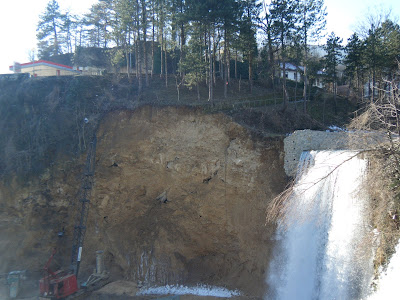 On today's impromptu after-lunch stroll my wander up to the view point overlooking Jajce's waterfall was interrupted by a familiar looking strip of yellow tape. MINE: not an indication of ownership but an announcement of clear and present danger. After a quick glance around I decided they was no need to do what Hilary said she did in Bosnia. I did not duck and run; I stopped and took this photo for you. Only last week I saw a new article posted on Facebook about a cliff fall a few metres from where I was standing. My mind was putting two and two together hoping for four. Was the danger not so much a mine as an undermined area? Is it wrong to suspect that MINE tape was being used as an all-purpose hazard tape?

Having experimented with various ways of capturing the view and the tape in a neatly composed image I wandered back down to the path that leads out to the side of the falls. The sun was in completely the wrong place for capturing a good photo – why I had headed for the upper view point in the first place – but squinting into its glare I could see that the fall had indeed take quite a chunk out of the cliff face. A path we once ventured down now ends end more abruptly than it did when we trod it. Something is being built by the base of the falls. There is a crane drilling deep holes down there. We've heard conflicting stories of what exactly they're up to. All that's obvious is there's some heavy machines and a lot of concrete down there. It wouldn't take a conspiracy theorist to conjecture there is some connection in all these goings on.

In closing, I should note that the view point is but a road's width away from a scenically placed petrol station. From its perspective I suspect neither mines or undermining are particularly good news.