What we see in Zagreb 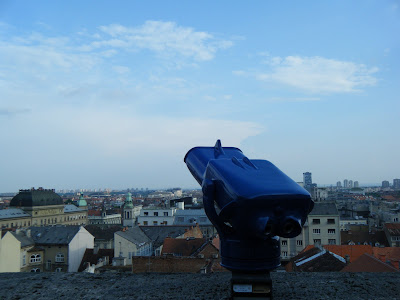 Last weekend the Pope was in Zagreb. We were there the couple of days before he arrived. The to events had no connection, except that we were as aware of his impending arrival as he was unaware of our impending departure.
However, the point of this post is to put Zagreb on the map if you haven't heard of it before. We would hope the capital of Croatia has crossed your consciousness before now but should it have evaded your radar that's about to be corrected.
We've only started to explore Zagreb since our move to Jajce; it's now about a four hour drive away, which is makes it a reasonable proposition for a weekend break. Where as every city we've visited in Bosnia and Herzegovina has a east meets west feel to its architecture, Zagreb is definitely a western city. It has charm and, though we can't claim to have visited any of them yet, it also seems to have a healthy collection of museums and art galleries. It also has recently landed a regular Easyjet service from London Gatwick.
If this reads like an advert, or a puff piece, I have to confess, sadly, that we are in no way getting remunerated for our kind words - not that we'd object if that situation changed! What we can say is that we have seen enough to know there's plenty we'd like to see more of in Zagreb. We'll definitely be back there some time. And if you're reading this in London or Paris you are just one cheap, direct, flight away from meeting us there!
capital Croatia easyjet London Paris Zagreb