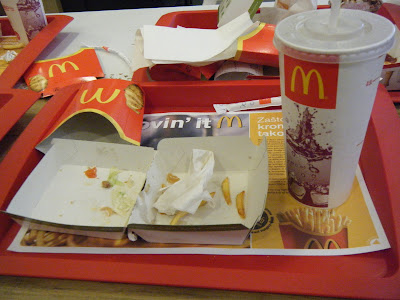 It's not a picture I'm proud of but I'll say I guess it had to be done to mask the clear lack of principled behaviour on display here. As someone who has enjoy living in a land beyond the reach of McDonalds and Starbucks it is unfortunate to have to confess that this weekend's trip to Sarajevo saw us not just sampling McDonalds traditional fast-food but also indulging in their take of the Starbucks formula.
One of the key strengths of the McDonalds brand is that, whatever you think of it, their food tastes the same wherever in the world you eat it. I don't care much for McDonalds' ability to steam a burger to within an inch of its life, but their hot apple pies and ice cream are a special kind of plastic magic. But who would have imagined they could tackled the decent coffee and cake thing? I was genuinely surprised; I certainly won't rule out a return visit. And that's a confession I didn't expect to make.
Bosnia and Herzegovina burger cake coffee McDonalds sarajevo Starbucks