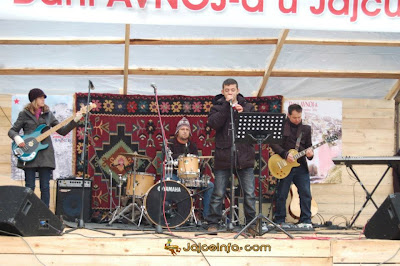 Having posted two photos of a people-free stage I thought I should end the run with this: us in action. It comes from an album of photos of the AVNOJ event uploaded by Jajceinfo.com. The album really captures the feel of the event so I'd recommend taking a few moments out to browse through them over a nice cup of tea...or similar beverage.

And talking of drinks...it was only last week that Rowan was reading that Somersby Pear Cider was coming for Bosnia and Herzegovina, as their Apple Cider was apparently a huge hit over the summer. I still maintain it tastes like vaguely alcoholic Apple Tango and am concerned it might damage the image of cider to first time drinkers over here, but the announcement of the arrival of its pear counterpart is good news. I found a bottle in Croatia this summer and was pleasantly surprised by how tasty it was. So it put a smile on my face when I stumbled across some in a supermarket earlier today...hopefully they'll still be stocking it come next summer!

HellyersOnline said…
just checked out the photos on facebook... what a turnout! The stage hinted at the whole occasion being a much smaller affair. Well done, looks like it went down well (46 likes for your band's pic on FB).
6 December 2011 at 03:29