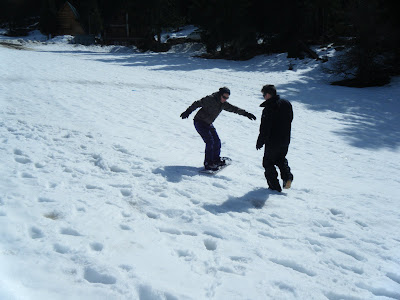 Today we finally got around to visiting Vlašić, a mountain about an hour and a half from Jajce. The season there is officially over and almost everything was shut up. But the sun was out and there was still enough snow on some of the slopes to give a beginner their first snowboarding experience. That privilege went to Katie, Novi Most's BiH-based journalist, who has been visiting us in Jajce this weekend. Despite my limited experience I'd say she is a natural; she certainly fared way better on her first time out than I did on mine! It's safe to say it won't be the last time she snowboards.
It won't be the last time we visit Vlašić either. It was great to get out and wander around the mountain, soaking up the sun and enjoying the silence. It seemed like the loudest noises were the wind in the trees and the sound of melting snow. Although the Babonovac resort is old and still has ruined and unfinished buildings in it - and the remains of an ancient ski jump - it also has some new developments that hopefully are signs of a positive future for the area. Today was one of those days that will live long in the memory and for that the mountain must take much credit.
Babonovac exploring snowboarding Vlašić