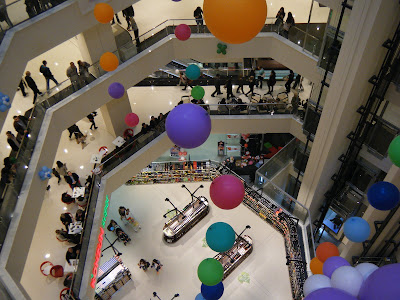 By some happy coincidence we ending up being in Mostar this weekend as the city's new Mepas Mall opened. When we lived in Mostar we watched the old hospital buildings where it now stands being demolished. We witnessed the digging of an enormous hole and watched as a giant concrete structure began to appear. Then we moved to Jajce. Almost two years on the construction is complete and it's open for business.

Business on the opening weekend was busier than we've ever seen in a shopping centre in Bosnia and Herzegovina. Shoppers and sight-seers were out in force, but we saw enough people parading fresh purchases to guess the shops won't be disappointed by early trade. The first night queues in McDonalds – only the country's third, and its first outside Sarajevo – were huge. We waited over half an hour to get served; so not exactly fast food, although you can't blame the staff for that. The next day security guards had been stationed to manage the melee.

While the five-screen cinema won't open until June, the Mall's ten-pin bowling alley is already up and running. We spent a slightly infuriating hour playing on Saturday night; annoying not because of all the noisy teenagers on the lanes next to ours but because bowling is so much easier on the Nintendo Wii! It's been a long time since we actually did real bowling and it showed. But the question I've been left pondering is what does this latest development show about Mostar. We bumped into our old landlord from Mostar. His comment was: it's big, isn't it...let's see how long it lasts!

I hope it does last. Why? Not because I think the world needs more McDonalds, that shopping can save the soul or that having access to a cinema should be a universal human right. I hope it lasts because a friend from Mostar commented that in three days they had seen so many people they hadn't been around town for years. In a city that is too often talked about for being divided this shopping space could provide a place that brings people together: a town centre that people can buy into. And if people buy in it too then it will continue to provide much needed employment and possibly encourage further economic development in the area.