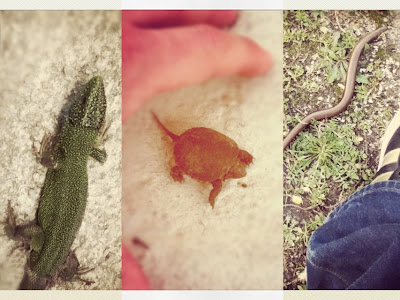 All of last summer we watched little lizards scramble over the wall opposite our house. I would say that with the exception of a singular salamander I happened upon while out cycling these were the only reptiles we saw but the glossy black fellow with bright orange spots was actually an amphibian.

This year we're barely into a convincing spring and we've already run into a host of interesting creatures. Pictured far right is what is probably a slowworm, which would have been sunning itself had the sun been shining. He was very unresponsive, as this YouTube video shows.

In the centre we have one of two turtles, tortoises, or terrapins that I didn't tread on today. We were visiting a local campsite and they were hanging out by the car park, clearly too young to be wise in the ways of the world. As for the guy on the left, I'm prepared to take suggestions as to exactly what he is. What I do know is he is lucky, as a lizard with no tail has almost certainly escaped some kind of near-death scenario. He also wins the prize for being the most mobile, something that will be immortalised on YouTube when I get a moment to edit the video together.

Beyond their true identities, the only real question that remains is what reptile will rear its ugly head next!
lizard reptiles salamander slowworm snake terrapin tortoise