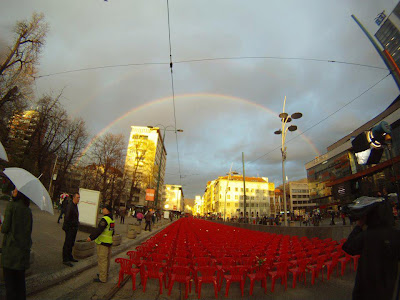 Much has been written, tweeted and retweeted, today about the beginning of the war in Bosnia and Herzegovina and the 11,541 red chairs laid out in Sarajevo to commemorate those who died there. I saw this photo on Facebook and felt it expressed my feelings better than I could in words.
This stretch of street in Sarajevo is a place we know well now - we were last there last weekend - but I have no idea what it was like to be there during the siege, although we have friends who spent four years trapped inside the city. Occasionally war stories crop up in conversation but it's never something we've asked questions about. We will never be part of that past but we are here now, working for the future of the people here.
It is right that, on all sides, what happened is not forgotten; that it is remembered so it never happens again. That twenty years from now the country can look back on two decades of peace and progress, not a descent again into division and destruction.
(If you've not read anything else online about the anniversary you could start with the BBC overview, or this from the Guardian. Balkan Insight's articles included this picture gallery.)
anniversary Bosnia and Herzegovina sarajevo siege Twenty year war