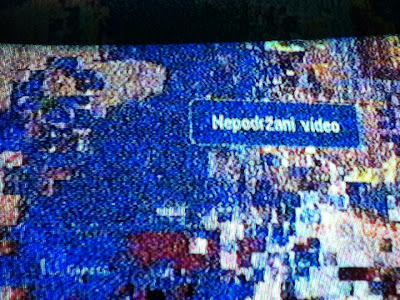 Those familiar with the sort of Bible stories that get told to children will know about Jonah. He's the guy who was running from God, only to become the cause of a big storm necessitating his being dispatched to the depths only to spend a long weekend in a large fish. If anyone was ever a jinx on a journey he was it. In a tenuously connected kind of way I feel I was a jinx on Saturday night's attempt to watch the Eurovision final.

As regular readers will have noted, I wasn't expecting to get the chance to take in this annual celebration of European entertainment. I therefore was not particularly disappointed when most of the evening's viewing looked like the image above. Whether this was the fault of the Croatian TV channel carrying the event, some technical issue further down the line or the fact I was present I don't know. What I did learn is that cynicism about the event is more widespread than I'd realised.

Conversation on the evening revolved around which countries could afford to host the event next year: the winner was clearly only going to come from one of these nations. These left a pretty short shortlist from which to guess the winning entry. Last night a local friend was condemning the hypocrisy of Bosnia and Herzegovina, Croatia and Serbia voting for each other. “They hate each other” was how she put it. Maybe they do, maybe they don't, but nobody's fooled into thinking neighbourly block voting doesn't exist. As our German team mate reminded us, the UK's problem is we have no neighbours. This may be true but maybe she wasn't aware three Englishmen were kind enough to write the German entry for them. What a game!
2012 coverage cynicism Eurovision jinx picking winners pixels television