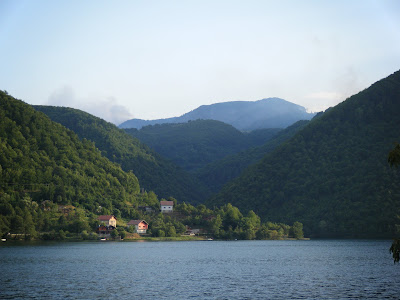 This is this evening out by the lakes in Jajce. What you can see around the the top of the mountain in the middle of the photograph are not clouds but smoke from fires that have been burning up there for the past two weeks.

We spent last week 'camping' out by the lakes: the inverted commas indicate that I understand staying in a bungalow doesn't equate to real camping; but neither I or any of the young people involved seemed to be complaining about that.

Almost every day was cloudless but every day we saw smoke. A few days before our camp started I had read about similar fires on a mountain outside Sarajevo. The article said no one was able to attempt to put them out because the area still had so many landmines it was too dangerous. According to a guy working on the rental boats we went out on, no one has attempted to put out these fires because there is no agreement over who the land that is burning belongs to, so no one feels the need to take responsibility.