- July 11, 2012
In the last couple of weeks we've had a couple of great watery experiences. Together with the Novi Most team we went on a canoe safari on the Trebižat river, near Čapljina. Surviving three hours on the water in the hot and sun without getting burned was something of a triumph - it was up around 40C that day - and our canoe skill were almost impressive, up until the point we capsized! I took photos but they didn't do the scenery justice. Neither does this video. Instead here's a picture from our latest adventure. 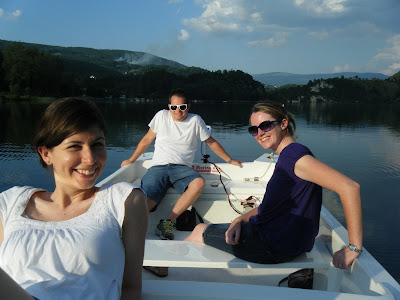 We have two friends visiting this week - the one who is less into being in photographs took this one for us! Last last we decided to spend an hour out on the lakes in Jajce in a rental boat. These boats have very quiet, battery powered motors that are very cool if the battery has enough power. Unfortunately for us, about twenty-five minutes out from our start point I began to suspect ours was not going to last the duration. A quick check around the boat revealed it carried no alternative forms of propulsion, other than our arms and legs. It was these that managed to guide us to shore some distance from the jetty we started from. Rowan went to ask for help and a larger boat was sent to pull us in. It would have made a great comedy home movie. However, being slightly more preoccupied with problem solving than video production instead what we're left with this a rather average collection of clips. On the plus side, the rental place didn't charge us. The lake is a beautiful place to spend a sunny evening; we would definitely recommend anyone wanting watery fun to hire something there. Just make sure it's fully-charged...or a pedalo!
battery boat canoe Čapljina hire Jajce lake pedalo power river safari Trebižat