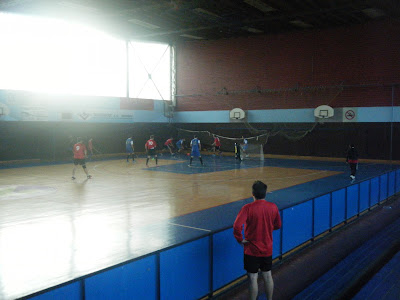 On Sunday afternoon we drove just over two hours to Prijedor to play floorball against the team there. Our team, Lavovi Jajce – or Jajce Lions, had comfortably beaten the Prijedor side that visited us earlier this year. We felt the return trip would not be so easy. And so it proved. The game was played with a level of physicality well above anything we reach in our training sessions. Our team are teenagers; Dina, who trains the side is, like me, in her thirties. The Prijedor side seemed to be all late-teens and twenties. For all the fact it was hard fought, it was a fair fight and 4-4 was probably the right result.

Rowan came along for the ride. Standing on the sidelines snapping photos with two cameras she was more often than not winching as one heavy challenge followed another. Floorball is a high-intensity, end-to-end game with rolling substitutions. The three twenty-minute 'thirds' that make up a match equal a lot of running around. Some of our team have yet to grasp the advantage of being substituted; I'm old enough to know I need to be. I could only be an effective physical presence in short bursts. While I picked up a lot of compliments for my contribution I felt it was only fair to post a picture showing me where I spent most of the game: on the sidelines!
draw floorball Jajce Lavovi match Prijedor result sidelines substitue team