When 2nd is the best 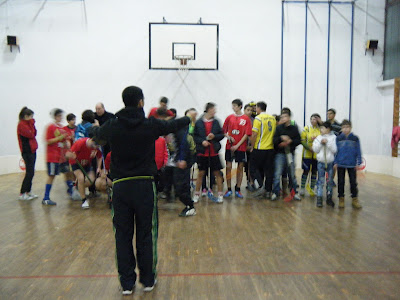 Back when I was in my late teens and early twenties "No Fear" was a very cool clothing brand and "No Fear" posters were a must have for any adventure sports enthusiast's bedroom wall. I remember having one of an extreme skier bursting off a cliff edge. "If you're not living on the edge you're taking up too much space" declared the bold text. A friend had a T-shirt that asserted: "2nd place is the 1st loser."

Yesterday, in a bitterly cold sports hall in Fojnica, our floorball team went some way to proving otherwise. We were taking part is a short six-way tournament between teams from Sarajevo and Fojnica. Each club had divided their squad into two. We had Jajce 1, featuring our strongest, fastest, players and Jajce 2, featuring the rest of us! We should have realised things were going to be a bit strange when Jajce 2 recorded a 7-0 win in its first match of the tournament. I think Jajce 1 felt they had to get at least one 8-0 scoreline. They managed a 4-0 but also drew a couple and lost one. The final table had Jajce 1 in forth and Jajce 2 in second. Being second was winning in one respect, upsetting the expected order of things.

But it didn't end there. The tournament included a third and forth place playoff and a final for the top two teams. Jajce 1 went some way to repairing their dented pride by winning their game. However, so did Jajce 2, ending the day as tournament winners. This was not a "No Fear" outcome; there was nothing 'loser' about being in the second team!