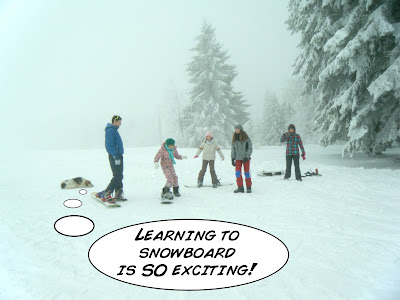 There is more going on in the world, and in our lives, right now than snowboarding. However, if you'll indulge us, I'll take this opportunity to explain why this photograph is actually a lot more exciting than the dog seems to think.

Today nine of us, and snowboards, headed up to the local ski centre. Three of us where the Novi Most Jajce team, three were older teenagers would been part of the group that did the intensive snowboard course we ran a couple of weeks back, and three were younger teens who had no snowboard experience.

The challenge for today was to see if we could put into practise the training we'd been given and pass on the skills we'd learned. We, the leaders, hoped this "we" would include the older teenagers; that they would help in training and encouraging those trying snowboarding out for a first time. That was the plan but we all know what can happen to the best laid plans. However, we also know we're not the only ones who love it when a plan comes together. And that's what we can report today: the younger ones learned, the older ones helped coach them and everyone went home happy. Hopefully there'll be enough snow for more of the same - with different faces - next weekend.
challenge coaching snowboard teaching teenagers today's training