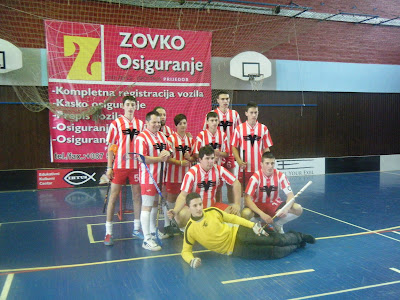 This is Lavovi Jajce (Jajce Lions) all smiles before our first game in the new BiH Floorball League. That's me second from the left. Saturday was the first of four tournament days we'll compete in this year. Hopefully we'll do better at the competing bit next time. We lost a closely fought first match 3:2, with the winning goal coming in the dying seconds.

However, for reasons I won't go into here, we for ourselves 2:0 down in about as many minutes at the start of the second game. Our opponents in this game go by the name Gromovi, which translates as Thunder. There's no thunder without lightning, and although they say this never strikes twice we were on the end of a brutal 12:2 thrashing. In the words of Yazz: the only way is up!
bih floorball Gromovi Jajce Lavovi league lightning strikes thunder tournament