The girls and the boys 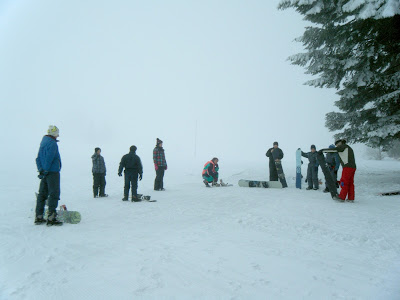 On Saturday morning I tweeted that we were “giving more young people their first snowboard experience today.” I added, “Let's hope they learn as much as the last group!” The last group was mostly girls, this group entirely boys. When we say girls and boys we're talking eleven and twelve year olds. Both groups were keen to get out on the snow with a snowboard; both groups found the first few exercises we gave them a little difficult.

After an hour or two this Saturday it seemed we might be collecting strong empirical evidence that girls possess better listening skills than boys. Our boys were not progressing as fast as the girls had and were not really following instructions, even instructions of the clear and repeated kind. We broke for lunch. When we returned to the slope it seemed, instead of our previous suspicion, we had just proved boys perform better powered by a generous helping of pizza.

By the end of our session all our newbies had mastered the basics and were excitedly telling us they'd just managed to do that last run without falling over once. Faces that beam with a sense of achievement say more than any “thank you for this opportunity” ever could. Of course, the inevitable question follows: when can we do this again? Hopefully, it won't be too long. We just need it to stay cold and keep snowing a little longer.
boys empirical evidence girls listening pizza skills snow snowboard snowboarding teaching training